CODEX is a strategy for generating highly multiplexed images of fluorescently-labeled antigens. In brief, antibodies to antigens of interest are labeled with antigen-specific oligonucleotide barcodes. The barcoded antibodies are then applied to a tissue sample where they bind to target antigens. Complementary oligonucleotide probes tagged with fluorophores are then applied to the tissue sample, one antigen-specific probe at a time, allowing hybridization to the barcodes on the target antibodies. An image is captured, the probes are washed off and the process is repeated. Up to 50 protein targets are interrogated, one imaging cycle at a time, allowing generation of a composite image of up to 50 protein targets within a single tissue section.

There are a variety of terms used in this document that may not be familiar to all HubMap users. The following figures illustrate several of these terms:

Figure 1: Pictorial representation of microscopy terms. The black box is an example slide or cover slip where the sample is located. Blue boxes are examples of “regions” or user defined imaging areas. For instance, if you want to image a specific structure in the tissue, you would designate a “region” over the structure. Red boxes are examples of “tiles” or the microscope “field of view”. The size of the tile is dependent on the microscope set up and objective. Tiles will fill the region. Because the field of view cannot be changed, tiles will overhang from the region, ensuring the entire region is imaged at the expense of extra tiles being acquired.

Figure 2: Images are generally acquired with adjacent tiles overlapping, as indicated by the dark regions in the image on the right above. Overlap enhances alignment of tiles for stitching to create a composite image, as shown in Figure 4 below. 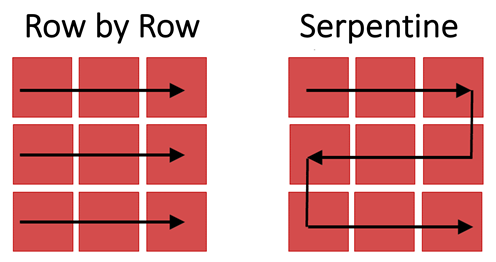 Figure 3: Images of tiles are captured as the stage moves across the imaged region row by row (left) or via a serpentine (or snake-like) path (right).

Figure 4: Stitching is the process of aligning and merging neighboring image tiles into a single composite image. 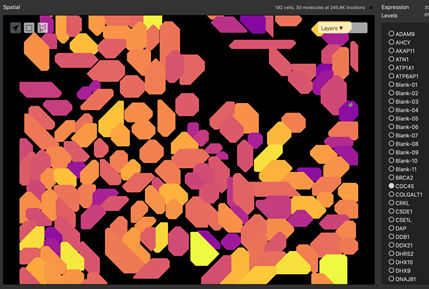 Figure 5: Segmentation of a microscopy image is performed by an algorithm that predicts edges of structures. Structures may be nuclear membrane, cell membranes or larger structures such as tubules.

All HuBMAP CODEX data will have searchable metadata fields. This metadata field schema now resides in Github where it can be viewed and downloaded. Any further changes must now be implemented by filing a Github issue for Chuck McCallum.

In addition, all HuBMAP CODEX data will have an associated json file which may contain the following additional metadata fields:

Each TMC will provide a file listing each antibody name, respective cycle and channel. This metadata file will then inform later processes at the HIVE and be used for labeling. Further, we aim to curate the final antibody list with expert interpretation of redundant names to make antibodies and markers a searchable criteria within the HuBMAP database.

Other differences between CODEX software employed by Stanford versus Akoya proprietary software are documented here. 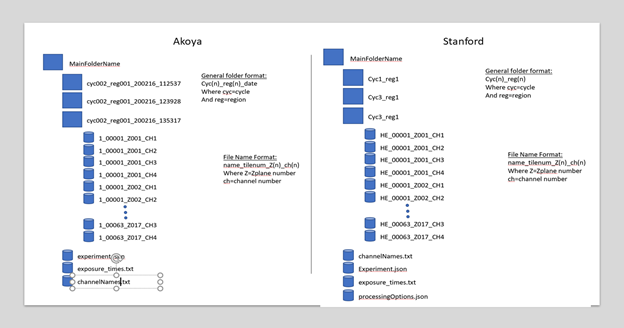 Stanford cell segmentation results can be found in the location mentioned below. You can see several text files generated per tile named as tilename-compensated.txt and tilename-uncompensated.txt. In addition to that, FCS and CSV files are stored based on the tiles, which are mainly used for analysis. The masks per tile can be found as .pngs which contain the images of cell boundaries.

The exact same data from Stanford is also available in an image sequence format, which stores the data in the same folder structure as Akoya’s format. But we can ignore this processed dataset with image sequence for analysis purposes.

If files fail to meet this validation criteria, they will not be submitted to the HIVE.

If no blanks have been included within the CODEX dataset, the recommended action by the HIVE is to reject the dataset.

3) After acquisition of the dataset, the CODEX commercial instrument generates a “.txt” “channelnames” file which lists the marker per channel/per cycle and has the general structure shown below. The operator saves a copy as a “.csv” file named channelnames_report and annotates each channel/cycle as described below. As shown in this example, DAPI is a DNA-binding fluorescent dye that serves as a control detected in channel 1 for each hybridization cycle (DAPI-01, DAPI-02, etc):

Blank channel is used to monitor autofluorescence at each channel (wavelength) which typically increases over time and with each cycle.

Empty channel indicates a channel (wavelength) that was not used to detect any marker during a specific cycle.

For each dataset, the number of cycles and channels is reported in the experiment.json file: 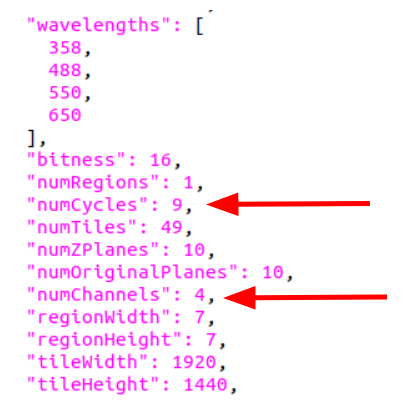 The operator annotates each cycle/channel with TRUE/FALSE to indicate whether or not the expected signal or absence of signal was detected, i.e. antibody bound to the target protein or the channel was Blank or Empty.

How to evaluate the channels to create the QA/QC channelnames_report.cvs file

A histogram and sample image is generated for every acquired channel. Each row is a cycle, containing its corresponding channels. Top-left image and histogram is always the first cycle, first channel. Image and histogram to their right is the same cycle, second channel.

The displayed image is a full-resolution cropped image that has the greatest standard deviation among those sampled. Each image may be of different location within the region, depending on the expression pattern. For example, cropped images for DAPI cycles 2 and 3 below differ in their sampling location. 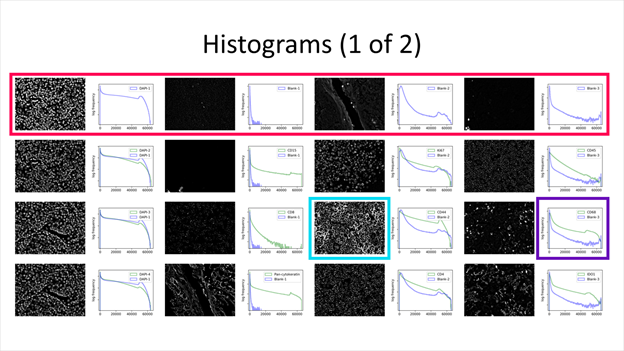 The histogram displays pixel frequency of signal intensities found within the region image. The horizontal intensity axis covers the 16-bit range (0 ~ 65535), while the vertical frequency axis auto-scales to the number of pixels found. Frequency is in logarithmic scale to better represent lower frequencies that correspond to biomarker signal.

Additionally, all cycles except the first contains two histogram plots. All purple plots are of the first cycle, which can be a reference for comparison, especially if the first cycle contains blank cycles. The legend specifies which biomarker the histogram represents.

A summary section contains basic statistics of biomarker region images. Each slide contains four cycles and their corresponding channels. Any non-biomarker channel (i.e. containing “DAPI,” “blank” or “empty”) will be grayed out.

These values can be used to assess image quality of each biomarker. As the threshold is not adaptive nor trained, the summary information should be considered within context.

A detailed slide for each marker acquired is also provided. The left-hand side contains image information identical to those shown in the histogram and summary slides. 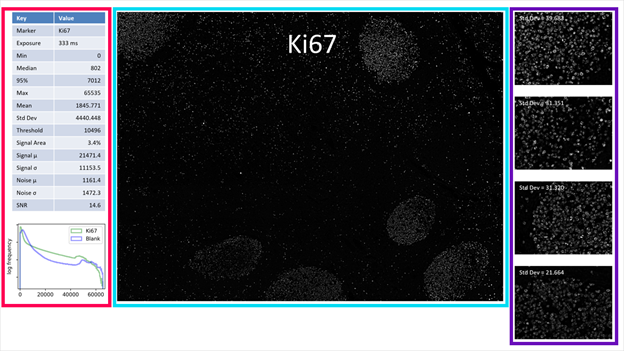 The main image in the center is the region image scaled for best fit and viewing on 4K displays (i.e. scaled to 288 ppi). This image is not in its original resolution and should not be used for detailed analysis.

On the right, there are four cropped images displayed in the original, full resolution. Within the whole region, 13 different areas are cropped at full resolution and compared for their intensity standard deviation. The four areas with the highest standard deviations, which often correspond to most contrast and information, are displayed in order.