While bulk ATACseq (Assay for Transposase-Accessible Chromatin) reveals the average of chromatin architecture for cells comprising a tissue sample, single-cell ATACseq (scATACseq), employs per-cell and per-molecule barcoding to enable single-cell resolution of chromatin architecture. The ATACseq assay itself is the same for bulk and single-cell templates. ATAC-seq employs a genetically engineered Tn5 transposase that inserts sequencing adapters into accessible regions of the chromatin surface. Analysis of the sequences derived from the Tn5 sequencing adapters allows identification of those regions of the chromatin located on the cell-state-specific surface of the chromatin. Single cell, single molecule barcoding: This diagram of the DropSeq process (droplet barcoding of single cells) from the laboratory of Steve McCarroll at Harvard Medical School illustrates the general strategy for droplet-based barcoding:

Software packages such as Seurat are available for single-cell data QC, RNAseq and data exploration.

In contrast to droplet barcoding methods, SPLiT-Seq (split-pool ligation-based transcriptome sequencing) employs a 96-well plate-based barcoding-by-ligation strategy (a.k.a. combinatorial index barcoding). In the case of sciATACseq, well-specific DNA-barcodes are ligated to chromatin-DNA reads (rather than cDNA). Labeled DNA reads are then pooled and split into a new 96-well plate. The barcode ligation, pooling & splitting is repeated in several iterations, as shown in Figure 2 below. 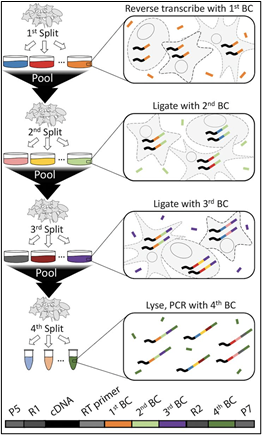 Some terms in this document may not be familiar to all HubMap users. The following table lists several:

The scATACseq metadata.tsv now resides in Github where it can be viewed and downloaded.

The bolded steps below constitute a series of standard ATAC-seq data analysis workflow.

The steps involved include:

(1) Computed by the HIVE. (2) TMCs will provide this information.

Definitions: Base quality scores: prediction of the probability of an error in base calling GC content: Percentage of bases that are either guanine (G) or cytosine (C ) K-mer overrepresentation: Overrepresented k-mer sequences in a sequencing library

Note that this is not per-cell. After read trimming, FastQC can be run again to ensure the successful removal or this is iterated. The output are trimmed-reads. Trimmed reads are mapped to reference genome, using Bowtie2 (with soft-clip strategy).

Once these “complicating” reads are removed. Tools like ATACseqQC/MultiQC (see refs in comment below) provide plots of fragment size distributions with decreasing and periodical peaks corresponding to nucleosome-free regions (NFR < 100bp) etc. There are other details like reads being shifted +4bp and -5bp for positive & negative strands etc. NFRs are interesting because fragments from there are enriched around transcription start sites (TSS) while NBR (nucleosome-bound regions)

Peaks are accessible regions. And this is a major step in ATAC-seq data analysis. Unclear whether we are planning to include this step in our standard pipeline If we are, then the one tool for this is HMMRATAC Nucleic Acids Res. 2019 Sep 19; 47(16):e91. Others are adaptations of Chip_seq, e.g., ENCODE uses MACS2 which is a count-based peak caller (basically is the read distribution different from a random background?). This is also where we can introduce biological replicates into the data analysis pipeline — again TMC expert’s should weigh in. Typically one can pool raw reads or combine peaks from individual samples or do more sophisticated statistical models like mixture models.

Files submitted by the TMC’s will be validated in the following ways:

If files submitted fail this criteria, the recommended action by the HIVE is to reject the dataset.

The ratio of fragments between 147 bp and 294 bp in length (mononucleosome) to fragments < 147 bp (nucleosome-free). This score quantifies the fragment length periodicity characteristic of an ATAC-seq experiment. Implementation: https://github.com/timoast/signac/blob/master/R/preprocessing.R#L587

The ratio of fragment counts mapping to genomic blacklist regions to the total fragment count for the cell. Genomic blacklist regions are defined as regions in the genome that have anomalous, unstructured, or high signal in sequencing experiments independent of cell line or experiment. These regions are defined here: https://github.com/Boyle-Lab/Blacklist

From ENCODE: The TSS enrichment calculation is a signal to noise calculation. The reads around a reference set of TSSs are collected to form an aggregate distribution of reads centered on the TSSs and extending to 1000 bp in either direction (for a total of 2000bp). This distribution is then normalized by taking the average read depth in the 100 bps at each of the end flanks of the distribution (for a total of 200bp of averaged data) and calculating a fold change at each position over that average read depth. This means that the flanks should start at 1, and if there is high read signal at transcription start sites (highly open regions of the genome) there should be an increase in signal up to a peak in the middle. We take the signal value at the center of the distribution after this normalization as our TSS enrichment metric

Fraction of fragments in peaks

The fraction of all fragments sequenced for a cell that intersects an annotated peak.

The total number of fragments for the cell that mapped to the genome.

Total number of fragments in peaks

The total number of fragments for the cell that fall in an annotated peak.

The ratio of fragments mapped to the mitochondrial genome to the total number of mapped fragments for the cell.

Does mapping, some QC (for 10x Genomics scATAC-seq)

Do aggregated reads from all single cells closely recapitulate the open regions recognized by bulk ATAC-seq (how many cells do we need? 2000–50,000 cells)